Shakespeare and the Shrew

This book looks closely at twelve of Shakespeare’s characters, who fit the theatrical archetype of ‘shrew’ (a noisy, argumentative or vocally defiant woman). It talks a little about the nature and details of the text, a little about the historic context in which they were first performed, but mostly about the way they have appeared on stage over the last twenty years or so. It argues that a society’s attitude to women is revealed in the way theatrical practitioners choose to interpret and perform female characters who don’t conform to feminine ideals of compliance and voicelessness. It gives examples of productions that have demonised, diminished or dismissed these characters, and others that have celebrated their subversive qualities.

Published by Palgrave Macmillan in their Shakespeare Studies series. Available from the publisher here. Available in hardback, softcover and e-book versions.

Shakespeare and the Shrew by Anna Kamaralli

“Whenever Shakespeare wrote a ‘shrew’ into one of his plays he created a character who challenged ideas about acceptable behaviour for a woman. This is as true today as when the plays were first performed. A shrew is a woman who refuses to be quiet when she is told to be, who says things that people do not want to hear. She is constructed to alleviate male anxieties through ridicule, but like so many objects of comedy or derision, she is full of power because of her very ability to generate these anxieties. ‘Shrew’ is supposed to be an insult, but has often been used to describe women enacting behaviour that can be brave, clever, noble or just. This book marries an examination of Shakespeare’s shrews in his plays with their history in recent performance, to investigate our own attitudes to hearing women with defiant voices.”

Much Ado About Nothing

It is now possible to order online, as paperback or e-book, the Much Ado About Nothing I have edited for the brand new series within Arden Shakespeare, the Arden Performance Editions. I am more than a little proud that this makes me the first Australian to edit a play of Shakespeare’s for Arden. I am also delighted by the vision for the series, as specifically designed for use by performance practitioners. The text is laid out cleanly, to be rehearsal-room friendly, and the notes give assistance with scansion and pronunciation, as well as making clear where there are clear cruxes for staging choices. Cheaper than standard Arden editions, it may even be possible to find one in bookshops. 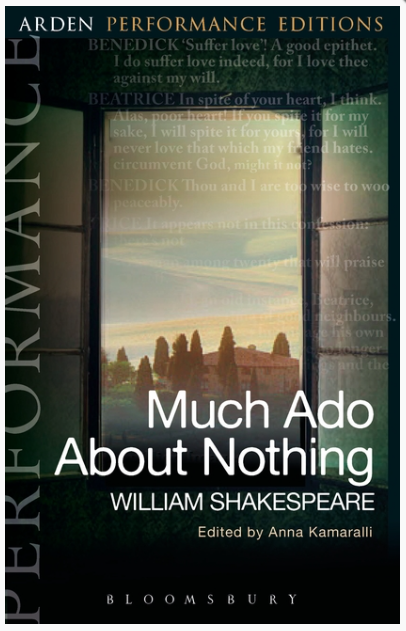 5 thoughts on “My Books”