I have been doing a few more sessions with the very, very young, to see if there is a way to introduce Shakespeare effectively to pre-readers and those who are still learning to read.

Some have been after school primary drama extension classes. In this particular venue I was expecting the children to be of mixed age, covering the whole of primary school. What I found was that only years kindergarten to year two (so, ages 5 to 7) took these particular classes, which meant I had mostly non-readers. So there was a shift on the fly from the read-this-out-loud material to the listen-and-respond stuff.

I also had one day with a group of upper primary children, which unfortunately was the least successful of my sessions so far. 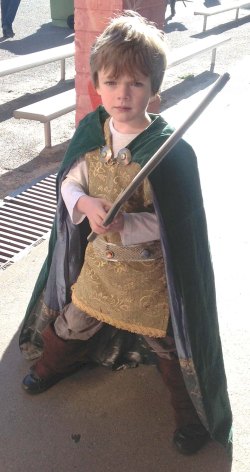 The students were all readers, and not shy, but lacked a certain level of cohesiveness I hadn’t realised was needed. One issue I have yet to find an effective strategy for is when students have difficulty with the waiting to take turns part. I like the performance/not really performance aspect of students showing one another their work. However, if you are handed a group of students who have an especially short attention span, or as in this group, seemed to have no interest in what anyone else was doing, then whoever is standing up and talking is missing out on the crucial step of being listened to. Teaching a group of kids to listen when someone else is talking is not going to be something I can do in one afternoon session. Drama classes, broadly speaking, are great for developing teamwork and group cohesiveness, but it doesn’t happen immediately, and it needs to have happened before some of my Shakespeare material will work.

A very simple introduction is to read aloud a short passage with lots of vivid imagery. There are then three progressive steps to involve the children, depending on how well it is working. First I look for a verbal response, which simply means I ask them what the passage made them think of. Then I ask them to get up and move, which can be done either as one whole or putting them in smaller groups of three or four, by reading line by line and asking them to make shapes to represent the things mentioned in the line, or just the feeling it gives. If they seem confident I then distribute the lines to the ones who would like to speak, and they read them out in order, as the shapes made by the other children move around them. By then you usually find you have created a neat little performance.

Because it is set on a fantasy island, I find The Tempest provides lots of useful passages. However, I also love this bit of George’s nightmare in Richard III:

All scatter’d in the bottom of the sea:

Some lay in dead men’s skulls; and, in those holes

Where eyes did once inhabit, there were crept,

As ‘twere in scorn of eyes, reflecting gems,

Which woo’d the slimy bottom of the deep,

This passage has many words that are archaic, or at the least would be new to children of this age, but which are placed within a context that makes them easy to guess at. Children know about shipwrecks, treasure and skulls, and can find all kinds of ways to build upon those images.

With the older children I have continued to pursue the idea of giving them more exciting ways to express familiar emotions. As I mentioned above, my most recent session failed, not for a lack of responsiveness of the students to the material, but for a lack of ability to give them a still space to try out what they were finding. Even here, though, the day was not without its productive moments. One that surprised me was a girl of about 10 working with Constance’s line from King John: “Here I and sorrows sit. / Here is my throne. Let kings come bow to it.” Her initial reading was completely wooden, she was just saying unconnected words. I wanted her to realise that there was a stage direction buried in the lines, that is, she says that she is sitting, so this is an action the actor needs to perform. I honestly wasn’t aiming for anything more sophisticated, I just pointed out that the words were telling her to do something, and asked her to figure out what it was. When she performed the action, however, it seemed to govern everything else about her delivery. Suddenly all this gravitas and dignity came out of nowhere. This is why I need to keep doing these little experimental sessions, because when I get great results more often than not they come from somewhere, in some form, that I could never have predicted.