It is the privilege of the fool to speak the truth, because a fool is not perceived as a threat. There is an element of suspecting the fool of being touched by holiness, seen in cases like the Russian concept of the yurodivy, but for the most part it is the fool’s lowly and excluded place in society that gives protection. But as Machiavelli would be happy to tell you, distance gives perspective. It is those pushed out of the centre who have the space to observe its knotty innards.

The wisdom of Shakespeare’s fools has long been recognised. Less noticed has been their fraternity with others on the margins. The characters Shakespeare charges with speaking great or uncomfortable truths are usually marginalised figures: fools, bastards, (presumed) lunatics, and shrews.

This is from my own book, in the chapter on Constance from King John:

“The vocal woman shares so much culturally with the similarly marginalized figure of the lunatic that it is almost unnecessary to make explicit the connection, as Shakespeare does through the character of Constance. Women who speak out have so routinely been called mad that the convenience to the status quo of such a dismissal is rendered obvious. But the marginalised of all kinds (lunatics, clowns, bastards, actors and women) are the ones destined to take on the mantle of the truthspeaker that those at the centre cannot afford to wear.”

Richard Denton, producer of Shakespeare Uncovered, wrote of Shakespeare, “Great artists, more often than not, come from the excluded sections of society, that’s why they have their unique perspective and that is why they have something to say.” One of Shakespeare’s greatest skills, which must have been very useful to him in his day job, was to imagine himself into someone else’s place. When Maya Angelou wrote that “Shakespeare was a black woman” it was because his characterising of the experience of exclusion was convincing to her. It says something powerful that when he had something deeply wise to say, he chose to imagine himself into the position of those who were mocked, ignored, rejected by his society.

Shakespeare was an actor. Actors were rogues and vagabonds. They were excluded from respectability enough for Shakespeare to have gone to enormous trouble to secure himself a pointless coat of arms (pointless because he must by then have known that he would have no one who could inherit it) that only displayed his awareness of his marginalised position. But as much as he may have sought to join those in the privileged centre in his private life, when he was in need of a figure to give public voice to his most incisive observations, his most biting truths, he went looking among his sisters and brothers, the fringe-dwellers. 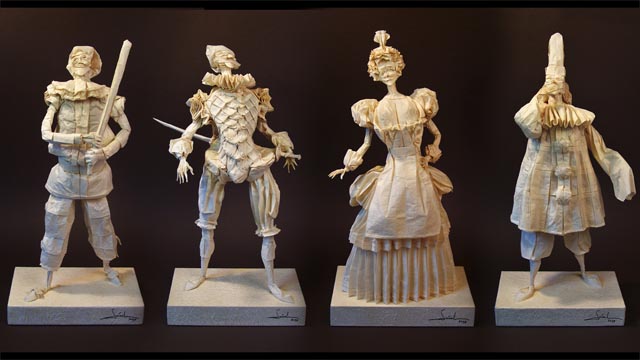 By Eric Joisel via Between the Folds